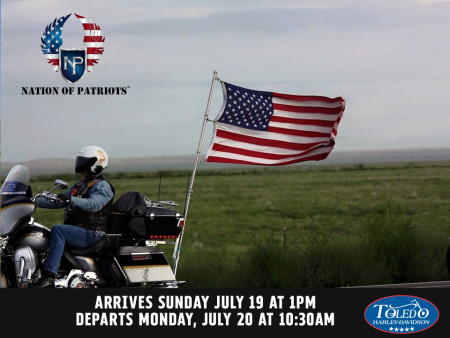 Veterans will escort the American flag to Toledo Harley-Davidson

Toledo, OH [July 9, 2020] – The Patriot Tour, a 110-day, 14,500 mile journey of the American flag through 48 states, will arrive on Sunday, July 19 at 12:45 p.m. at Toledo Harley-Davidson, 7960 Central Ave, officials confirmed today. A 1 p.m. flag transfer ceremony is planned at the dealership, according to Brittinee Huntley, Director of Marketing.

Flag bearer, Cordell Rohlf will receive the flag from flag bearer Jake Allison who is escorting the flag from Clyde, Huntley said. Rohlf served from 2014-2018 in the Army as an 11B Military Police and is Sales Associate at Signature Harley-Davidson in Perrysburg, Ohio. “All are welcome and invited to witness the arrival of the Patriot Tour on July 19, at the Toledo Harley-Davidson dealership,” Huntley said. “We are encouraging supporters to line Central Avenue or the dealership’s driveway between 12:45 p.m. and 1 pm.”

At 10:30 a.m. on Monday, July 20, Rohlf will depart Toledo Harley-Davidson with the flag for its next stop in Cement City, Michigan. He will be escorted by members of the Toledo and Glass City HOG chapters.

The Patriot Tour, presented by the Nation of Patriots, launched in virtual mode from Williams, Arizona on May 23 and until its arrival in Erie, Pennsylvania on July 16, the flag had been passed city to city by veteran flag bearers via video released on social media. The Tour moved to a live format in Erie and will travel through the remaining 20 states in this manner, ending in Scottsdale, Arizona on September 12, confirmed Nation of Patriots Executive Director Bill Sherer.

The Patriot Tour and this flag are used to raise funds for the national nonprofit organization, Nation of Patriots, whose sole mission is to enhance the lives of wounded veterans and their families. “An entirely volunteer-powered organization with overhead costs funded by corporate sponsors, the Nation of Patriots ensures that 100 percent of funds raised go directly to veterans in need,” Sherer said.

More information about the Tour and opportunities to support the Nation of Patriots can be found at nationofpatriots.org.

About the Nation of Patriots

Nation of Patriots was founded in Milwaukee in 2009 by Bill Sherer who was inspired to take action after witnessing the hardships his friends endured upon returning from active duty. A 501(c)3 organization, the Nation of Patriots works nationally to financially support veterans and increase awareness of the physical, emotional and economic adversity that disabled veterans and their families live with today and every day.

As a volunteer-powered organization, with administrative costs covered by corporate sponsors, Nation of Patriots donates 100 percent of its proceeds to veterans in need. The organization identifies those who will benefit from its funds by working with VA facilities and other veterans organizations across the country.

To date, more than  $1.2 million has been raised through this grassroots effort since the Nation of Patriots’ inception. The 2020 fundraising goal is $300,000. “The Nation of Patriots is dedicated to honoring our unique American freedom and those who defend it, which is why the most critical piece of our mission is to see that every dollar we raise goes to American veterans and their families,” said Sherer.

The Patriot Tour flag has flown over the White House, on the USS Independence Aircraft Carrier, in an F-16 fighter jet over the Nevada desert and on the motorcycles of more than 1000 proud flag bearers with escort riders numbering in the hundreds of thousands.

To learn more about the Nation of Patriots and its Patriot Tour schedule, visit www.nationofpatriots.org.

Donations can be made at any of the tour stops, online at www.nationofpatriots.org or by U.S. Mail to: Nation of Patriots, P.O. Box 73, Sussex, Wisconsin 53089.

About Your Hometown Dealer

Toledo Harley-Davidson located at 7960 Central Avenue in Toledo (ToledoHD.com). Offering new and used motorcycles, year-round service, winter storage, parts and performance as well as a full line of riding gear. Additionally, this location offers riding lessons for both new and experienced riders through their Riding Academy.